Get the book: Daily notes on 1 Timothy

Take the challenge to work through Paul’s first letter to Timothy over ten days. The notes will inform, and set you thinking. They are easy to read in under twenty minutes. They include colour photographs and a section for further reflection or discussion. Ideal for those who want to be prepared to read the Bible with first-time readers. At the end there is a section on words and their meaning, as well as who’s who in 1 Timothy.

Available as a paperback or in Kindle
Buy on Amazon 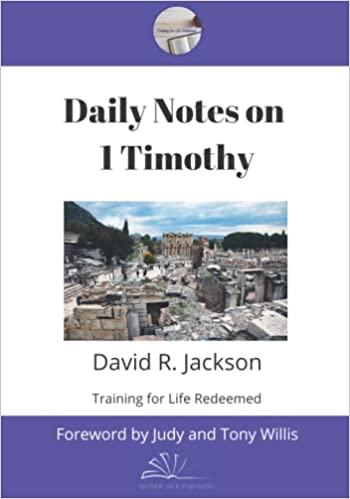 Grab your notes for this episode by completing the form
and we will send you the link to all our notes.

Hi, right . Welcome to episode 34 of trainingforliferedeemed. I’m Dan, the host, and this is my dad, Dr. David Jackson, who is the one who shares everything all the time. Today, we are going to be looking at one Timothy chapter one verses 18, all the way to the end or halfway through at the end of chapter two of first Timothy. Now Dad, you’ve picked a really content heavy, controversial passage here for us to be chatting about. So let’s start with the first little controversial bit, which is comes at the end of one Timothy chapter one, where it talks about handing this guy over to Satan so that he might learn not to blaspheme.

Yeah. Yeah. there’s all sorts of issues with authority. There’s all sorts of issues with , dodgy teaching and stuff going on. But the church is constantly going to have these characters come up who want to reinvent the gospel and re-invent reality , to suit themselves. And they it’s one thing when the world does it. And then they criticize the church. I t’s a whole other world when it’s your best mate on the eldership, in your church, who suddenly comes up with some bright idea that totally throws the gospel out the window. and these fellows are doing that and they’re doing it with a passion and they’re doing it at a time That’s really, really dangerous. So three years after the false teaching that you’ve got in one Timothy, is all about Jewish myths and genealogies and all this sort of stuff. And it sounds a lot like what’s going on back in Palestine as the Jews in Palestine are whomping it up to go to war with Rome, and you start believing these lies and people get dead. So this is really dangerous stuff. and we know that in our church today, I mean, how many times do we have a scandal in the church? You’ve got elders doing paedophiles and all sorts of affairs with people and it all hits the newspapers and the reputation of Christ goes down the toilet. Yeah. and we’re struggling with that all the time. and I, I look at that and I think the, by Jesus set up this thing called church discipline. If you’ve got somebody in your church that’s bringing down the name of Christ they’re sinning and they’re refusing to repent. And it can be that they’re teaching things that are not true all the way through to sexual and financial, you know, wickedness. What do you do with that? And in Matthew 18, Jesus tells you sit them d own quietly, go through what they’ve done, wrong. Call them to repent. If they won’t listen, bring some eyewitnesses with you. And when the eye witnesses come, they are eye witnesses. I saw you do it. So you can’t get out of this. Now, if you’ve got two you, can’t do it on one eyewitness, you’ve got to have two or three. You bring me two or three eye witnesses. We saw you do it, mate repent. And the guy says, no , what do you do with that? You got tell the whole church. That’s a , that’s, that’s a really scary thing because the whole, the sin of one person affects the whole body. So you go to the whole church and you say to the whole church, look, we’ve talked to this guy. W e brought the eyewitnesses. There’s no doubt that this is what he’s teaching, or this is what he’s doing. So the whole church turns around and says, come on, Fred, wake up to yourself, repent. And Fred says, nah , you know , I’ve got all this enlightenment from heaven. The angel dropped down and gave me an extra book of the Bible. And I’m , you know, whatever it is , uh, you know, we’re in love and therefore God is love. And therefore I can commit adultery. I’ve heard that line too many times. So the church turns around and says, right, mate, sorry. You’re out. You can’t call yourself a Christian. When the world looks at you and says, oh, that’s what the Christ is all about. We’re going to say, no, he’s not one of us because we want to protect the church. We want to protect the name of Christ. And we want you to repent, mate. We want you to be saved. We don’t want you to walking off into wickedness and things that are going to get people hurt and dead and all sorts of problems. And if you believe this stuff, you’re leading people to hell. So this is serious. We can’t just let people wander around in our churches, carrying on like this. We’ve got to be vigilant with our doctrine, vigilant with our lifestyle. And sometimes it comes down to just heart attitude. Doesn’t it? Yeah. So, you know, Paul’s, we’ve had these problems in Ephesus for probably three, four years since the church was planted. And Paul has written a letter and said, okay, fellows , get rid of these two put them out. And he talks about handing them over to Satan.

Well, Paul’s thinking there’s two, there’s two kingdoms in this world. There’s the kingdom of God. And you enter that through faith in Christ. Then you have the kingdom of Satan, which is everybody else. And if you’re in the kingdom of Satan, you’re ruled by sin, you’re ruled by the father of lies and everything you do just creates damage out of that. And it’s not because you broke a rule or you didn’t wear your school uniform the right way around. It’s because what you’re doing is actually hurting people. Um, you know, you’re operating the machinery backwards and you’re going to get caught in the, in the Thrasher, you know, it’s, it’s serious stuff. So yeah, that’s where we are.

All right . So there’s no surprise then that Paul would then talk about the atonement straight after such kind of clear words to , uh , getting the atonement . Right. And you know , Jesus dying and salvation and all that kind

Of stuff. We’ve , we’ve lived for centuries with , uh, so many different theories of the atonement. And how did, how did the cross work, how did that save anybody? Um, why did it save anybody? Did it save anybody? Uh, or do we save ourselves? So if you don’t get the cross, right, you haven’t got the gospel. So to keep it simple , um, I use the illustration in the study from Charles Dickens, a tale of two cities where one guy is in prison. He’s about to get his head cut off in the French revolution. Um, it’s a lovely, romantic story. You can read it in the notes, but his mate comes in , um, knocks his friend out, changes clothes, and the visitor, the prisoner leaves the jail in the visitor’s clothes , um, feigning sickness or something. And gets past the president guards and he escapes, but he’s made, puts on the prison clothes and gets his head cut off instead. So it’s Jesus taking my place and the judgment that I’m sentenced to as a sinner falls on him. Now that’s, that’s in the minds of a lot of people. That’s really serious stuff and it is. Um, but people make up other ways. Um, did you know one of the great controversies with CS Lewis’s line and the witch and the wardrobe when Aslan dies, is he paying off Satan or is he paying off God? Who’s who’s who’s the ransom paid to? Are we paying the ransom to Satan? And the answer is, of course not Satan is not the judge in any sense at all to pay him. No. Well you go and read, there’s a big controversy about CS Lewis and his understanding of the atonement. But as we look at this, he’s saying, you’ve got to grasp the idea that Jesus death actually pays the debt. Well, hang on a minute, then I’ve got a problem. If Jesus death actually pays the debt, how come people still go to hell?

how’s it become effective for some people? Not for others .

Yeah. Is it what we do that makes it effective? You know, what’s going on here? So I stumbled across this thing in Job. Um, it’s in the notes Job 40 and God says to Jacob , you know, people say you can, it’s your good works. that gets you saved. And God says to jab, okay, I’ll allow, that is true. If you can deal with all the sin in the whole world, if you can eliminate all wickedness in the whole world, then you can save yourself by your good works. Now that’s sarcasm. I mean, really who could deal with all of the wickedness and all the injustice in all the world. And so when you read in the Bible that Jesus died for all, he has taken Adam’s guilt, the corporate guilt. And in the Old Testament, there’s a day of atonement  where the animal dies and it pays for the whole nation’s sin, but not every individual in the nation gets saved. Yeah, they’ve got to own it. They’ve got to accept it. They’ve got to put their faith in it. And then we read in the new Testament, faith is a gift. So God has given us that connection, that faith to make what Jesus did mine . Now, if we get that doctrine wrong, people are still going to hell. So Paul is urgent here that the church that the teaching ministry of the church gets it. Right?

Yeah . Sorry. So he urges to pray about it. Yeah. And you do and things are important. P ray that brings us to the end of this episode of trainingforliferedeemed. So if you would like to come and grab the daily notes that dad referred to a few times throughout this podcast, please do make sure that you come over to trainingforliferedeemed.com/34. And you can get the daily notes there. You can also grab the transcript and this week’s episode we’ve actually decided we would video it as well for you. S o if you want to come and watch us t o sit next to each other and have a chat, please feel free to come and come and check that out as well. We’d love to get your feedback on that, whether you liked the video format or not. Uh, and yeah, please make sure you subscribe. If you like this, make sure you leave us a review if you loved it. And we hope that you’ll come back and join us again next week, when we continue to look into first Timothy chapter three, church leaders, church leaders. Thanks Dan. Thanks.

About the Author: Dan